New artists can be interesting sometimes.  Some people have a hard time taking new artists seriously, even if their debut record is released by a big-name label.  Black City Lights, a pop artist from Wellington, New Zealand is no different.  Their previous EP, "Parallels" was an interesting release through which the group showed a lot of promise.  That EP was good but not great.  Since "Parallels" Black City Lights have released several singles.

The year 2013 has finally given us a debut full-length album from the band.  Where "Parallels" was good, "Another Life" is fantastic.  The artist has deepened their sound and have much improved in the vocal department.

Black City Lights is most described as a dream-pop outfit, though the band seems to shy away from that label.  The problem with such a genre-specific label is that adhering to it only served to inhibit the musical artistry.  I think a more apt description of the music would be ambient synth pop with a very chill wave vibe running through it's veins (holy vernacular, that's a lot of 'v's, Batman!"

If I were to compare artists, :Papercutz, whose latest album we raved about, would be at the top of the list.  Though the vocals are still not quite as strong as those from the aforementioned band, the cold, dreamy synths behind the vocals more than make up for it.  Don't get me wrong; I'm not saying the vocals are bad.  They are quite good as a matter of fact, just not quite as prolific as :Papercutz.

The music in this release is deep and moving, packed with grandiose synths that paint the musical landscape with beautiful, ambient brushstrokes.  Standard electronic pop beats akin to chill wave music float to the surface in stunning fashion.  Another term I would use to describe the music would be dark cold wave.  This record emits a chilling darkness that is both beautiful and eerie.

Most of the tracks on this album are brand new.  One is a previously released single and at least one other track comes off of "Parallels".  If you are into pop music that doesn't meet the rigid qualifications for heavy air-play, you will most likely enjoy this disc.  This music remains interesting and beautiful throughout the short 45-or-so-minute run time.

It is surprising just how good this album is.  I can fully recommend listening to this.  As it turns out, the band is offering a free stream of the album through their bandcamp page.  We have embedded that player here.  Thanks and, as always, enjoy!
Posted by Unknown at 5:11 PM No comments: 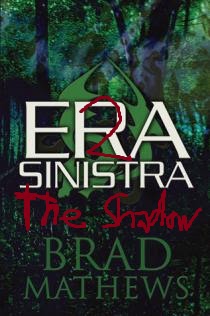 As we have noted here several times in the last few months I am working on a new sequel to the acclaimed Era Sinistra.  This is an exciting era in the evolution of Brad Mathews.  As I can attest, promotion of said work has been difficult.  If you have not yet had a chance to check out the original Era Sinistra, you can view the product and read about it here.

Now I have come to this: As a service to those of you who enjoy a good mystery by an author you are familiar with, I have decided to answer questions regarding the new Era Sinistra installment from you, the fans and readers.  It is something to keep you interested and something to get you licking your chops for the final chapter of the saga.

Without further ado, here are the questions and answers:

Q: Where and what time frame do the characters live in?  --Alik

BM: One of the challenges of writing a sequel that takes place 11 years after the conclusion of the original story line is finding a way to tell the story in a way that illustrates the passage of time.  Era Sinistra takes place in the present time, so 11 years later would be in the future.  Telling the story from the perspective of 11 years in the future is a balancing act between showing future technology without getting too sci-fi-ish.  Most of the story takes place in the mountainous back country of Western Idaho.  It is a very scenic, out-of-the way location in which the main characters seem somewhat 'out of their element.'

Q: How do you choose human characteristics for the characters in your books? --Allison

BM: Believe it or not, I compose most characters off of what I believe to be enduring characteristics normal, every day people.  For instance, I try not to write from the point of view of law-enforcement officials too much.  I need the characters to come off more human and more relatable than your typical crime and police-procedural characters.  I keep physical characteristics to a minimum unless those traits are central to the plot.  The most common method I use to flesh out characters is to just write what comes to me.  Human attributes such as personality and emotional presence evolve, just like in real life.

Q: Is this a continuation of another saga? --James

BM:  In a way it is.  What I call it is a separate story built on the events and characters of a previous episode.  In layman's terms, a sequel.

Q: What is the release date of your new book?  --August

BM: That remains to be seen.  As opposed to the film and music industries, book industries rarely publicize 'release' dates unless the book is heavily anticipated in the media.  Also interesting to note is that books are never released on a prescribed date.  They are released whenever they come off the presses.  This book should 'come off the presses' a few months after completion.  As of now, I am just over halfway through the story, so realistically, we are talking about winter or spring of 2014.

Q: What is the sequel's title? --Marion

BM: This has been a difficult story to assign a working title to.  Early on in the process, I was simply referring to it as Era Sinistra 2.  I tossed around several names in my head for quite a while.  Of these various names, Days Without Rain seemed really interesting.  That, however, doesn't quite fit the story perfectly and too closely resembles the title of an Enya album.  I believe I have finally settled on this: Era Sinistra: The Shadow.  This is both a play off of a common character's perception of the story's main antagonist and a notation about the years following a noted time period--the shadow of an era, if you will.

Q: How do you choose the setting for your books? --Makiah

BM:  This is a difficult question to answer.  The easiest answer I have is that the story simply takes place where I visualize it in my mind.  Rain Dance was easy, since the concept of the book came from a dream I had where I was sailing in the waters of he Puget Sound in the dark.  For Era Sinistra I had to build the scenario because all I had to go from was a brief news story.  It was definitely going to take place in the woods, but where?

Q: What made you decide to write a sequel? --Sandy

BM:  A while after reading Era Sinistra again I realized that the previous book intentionally left some loose ends.  So, naturally I began to ask myself what would happen next?  As I thought about it, the basic plot just came to me.

Q: Do you think paperbacks are a dying medium?  -Steven

BM: Everyone knows that the hot medium right now is the e-book.  Traditional trade paperbacks, as a result are seeing a decline in popularity.  Still, not all people own e-readers and many people prefer real, bound books. There is no doubt that such books feel more substantial.  Still, it would be foolish not to capitalize on the latest trend in the publishing industry.  I'd say most people own some sort of device that can display e-book text.

Q:  In what forms are you going to print this book?  -Liz

BM: Although the future may hold a paperback version of this book, my plan is to self-release it as an e-book only format.  The advantage is that e-books can be priced much, much lower than traditional paperbacks and will last longer.  The decision to go this route stems both from a desire to reward my readers and the need to emerge from beneath the oppressive hand of the traditional publishing industry.  My frustration with PublishAmerica is well-documented by now.  Simply put, I will never let that sham of a publisher make another penny off a new book I write.  The book will likely sell for about $2.99 USD, but there will definitely be promotions which will allow readers to download the books for discounts or FREE for a limited time.

Q: Do you have plans for another novel?  --Mike


BM:  I do have one outline that seems quite interesting to me.  It is sort of a military-type story that presents an interesting battle and its mysterious underpinnings.  I also have a concept to a sequel to The Thousand Branches, but I'm not sure if real plans for that will ever materialize.  Right now, I'm putting all of my writing focus on The Shadow.

BM: Thank you all for your questions.  Hopefully my answers have given some insight on what is behind the new book.  Also, thanks for stopping by.  Your readership is the main engine behind this blog staying up and running.  We normally talk about music, so please come again!

-brad
Posted by Unknown at 5:41 PM No comments: