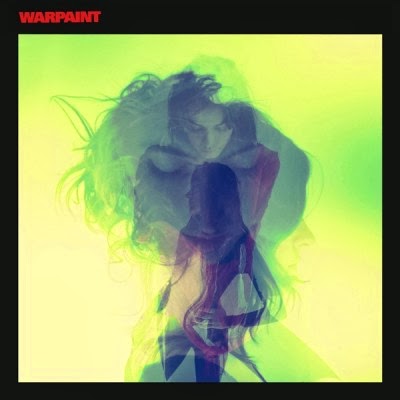 Please allow me a moment to publicly renounce all my notions about genre classification.  This is necessary because the new eponymous album by LA's Warpaint blows them all out of the water.

I am finding a recent trend in music where bands are incorporating aspects from many different styles of music.  In the 80s or 90s, this idea wouldn't have gained any traction.  It probably wouldn't have worked well in the early part of this century, either.

There are three positive ways to react to an album stream by a band you've never heard of: Interested, maybe I'll look into buying it, great, I think I want this, and Holy Mother of Judas!  My reaction to the brand new album by Warpaint was the third option.

This female foursome knows how to rock.  What we basically have here is poppy vocal melodies played over lush ambient textures with bombastic drumming and many electronic beats.  This band uses human drumming and drum machines in a creative way that I don't believe I've heard much.  The two styles blend together seamlessly.

All of these different ideas and band traits could have been a cluster of confusion.  Instead, it is one of the most fun listening experiences I have had in years.  I'd heard one song prior to listening to the album.  It was fantastic, so I was eager to start the album stream when it was posted online.  What happened with the rest of the album is beyond words.  The only previous album I can remember where I've had this much fun listening was early last year when I first listened to the latest :papercutz album.

The moods and energies in this album are unpredictable and exciting.  The textures present in the music are dark and brooding to an extent where one could haphazardly label this as a gothic rock album.  Such simplified genre classifications, as I alluded to above, are becoming less and less accurate.  You could label this album many things, but what it really is, is great music that adheres to no set of stylistic genre rules, whether arbitrary or not.

Another thing I would mention is that this album is a grower.  The deeper into the album you get, the more you get wrapped up in it.  Listening to a single song hardly does it justice, although the lead single Love is to Die is pretty fair representation of what you will hear on the rest of the album.

Warpaint is scheduled for a Jan. 21 release, but pre-streaming is available.  Just Google Warpaint.  I don't care what kind of music you listen to.  You need to check this album out.  Love is to Die is posted below.  As always, thanks for reading and enjoy!
Posted by Unknown at 5:21 PM No comments:

It's official.  The scourge that was 2013 is behind us.  Maybe the number 13 is really unlucky.  It was a bad year for a lot of reasons, both personally and politically.  And I don't follow politics.  At all.  It's pretty bad when political stuff gets me down.  Fortunately, the year 2013 gave us a lot of great music.

Metal music as a genre had a very strong 2013.  There were some surprises, some jaw-droppers, and yes, some snoozers.  Picking the very best metal albums of the year and limiting the list to only 5 was a chore.  The last thing I wanted to do was leave a great band who released a great album off the list, even though that's what honorable mentions are for.

1. In Vain-Aenigma
Norwegian metallers In Vain released their third full-length album in 2013.  Following their excellent album Mantra with anything resembling greatness was going to be a tall order.  No only did they pull it off, they did so with such gusto and flair that it was surprising.  Whereas Manta as an expressive journey through progressive soundscapes and song structures, Aenigma is a heavy dosage of progressive metal tendencies, but with simpler structures and more straight-ahead undertones.  Little of the blackness that marked Mantra feels retained.  If it were even possible to improve on that last album as a whole, the vocals could have been left behind.  But the vocals are even better here than on this album's predecessor.  Listen here.

2. Leprous-Coal
Some bands do progressive Avant-Garde metal better than others.  I was not high on this Norwegian band's music before.  It came across as so proggy that it was not fun to listen to.  So with trepidation I listened to the band's new release, Coal. My initial reaction was some combination of a curse word and a smile.  It was much better than past Leprous albums, and darker.  Despite the somewhat cheesy album cover, I felt compelled to listen.  It was much, much better than I expected.  Listen to one of the fantastic tracks here.


3. Omnium Gatherum-Beyond
I have always enjoyed Finnish band Omnium Gatherum's atmospheric keyboard melodies played against chunky melodeath.  As a result, the new disc, Beyond was highly anticipated.  How would the band follow up the mesmerizing New World Shadows? They did it by making a record just as majestic and crushingly heavy.  They don't use many clean vocals on this release, but when they do, they are very good.  I knew after listening to that album that it would make some year-end lists.  And mine is not the only list it appeared on.  Listen to a track below.

4. Amorphis-Circle
In recent years, Finnish metal band Amorphis have floundered in relatively uninspiring albums.  While Eclipse, The Beginning of Times, and Skyforger were not bad albums, they generally failed to live up to the fans' lofty expectations.  Their sound was becoming less and less heavy and more experimental.  With the notion that Amorphis was a band on a downward trend, I listened to Circle anyway.  My opinion is that this album is the band's best since their early career.  On this album they successfully marry the heavy that had been missing with the melody that has defined Amorphis' career.  Listen here.


5. Fleshgod Apocalypse-Labyrinth
The heaviest music in our lists this year comes from Italian symphonic metal band Fleshgod Apocalypse.  I have been a fan since the EP Mafia was released.  Since then, the bend have incorporated an increased symphonic presence in the madness of ultra-heavy music.  This album is complete with technical guitar wizardry and inhumanly fast blasting drums.  The symphonic keyboards are not overdone and, even when choral sections emerge, they do not overstay their welcome.  If you are not familiar with this band, you might want to wear a neck brace while listening to this track.

As always, thanks for reading and enjoy!
Posted by Unknown at 10:36 AM No comments: