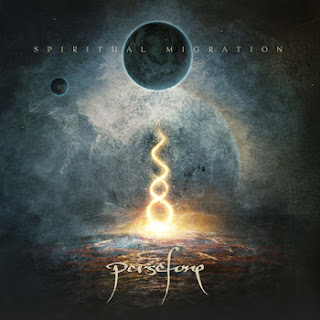 Bands who name themselves after mythological gods can sometimes come off as pompous and a little bit insincere.  Several metal bands named for gods are out there today, and I only truly enjoy one of them.  Persefone is an Andorran progressive metal band that dares to dabble in many different styles.  Their approach to modern extreme metal is admirable.

If You don't know much about Andorra, who can blame you.  It is a small country located in the Pyrenees Mountains sandwiched between Spain and France.  The entire population of the country is 85,000.  For comparison's sake, Meridian, Idaho, the city in which we live, has 81,380 people.  Thus, it is interesting that any metal band comes from that nation.

As for style of music, the concept is almost purely metal.  The band's previous album, "Shin-Ken" had an oriental feel to it, where approximately half the album was raging extreme metal, while the other half was quiet, reflective ambient instrumental music.  This offered a bit of confusion, but after listening to the album several times over, I began to get a feel for the intended flow of the record and thus, appreciated it more.

A few weeks ago I was listening to a song from "Shin-Ken" and found myself wondering if they had any new music coming out soon.  As it happened, the release of a brand new opus was taking shape.  "Spiritual Migration" takes off right where "Shin-Ken" left off, but added several refreshing new elements to the music.

The Orchestral backing on several of the tracks was a welcome addition.  This is added to the fury of metallic riffing with ultra-quick, razor-sharp drumming, which creates an almost surreal effect, like glimmers of light pierced a darkened void.  The string sections then subsided for a few tracks, giving way to serpentine guitar leads and voracious grunted and howled vocals.  This sound is what Persefone has become known for.

Later on the album, the orchestration returns.  Moody ambiance permeates a track or two, and some funky electronic concoction even shows up in one track.  My first impression was that this record was so incredibly varied that it could be seen as obtrusive and distracting.  I enjoyed everything I heard.  Since "Shin-Ken " Persefone have certainly honed their craft and tightened their sound.  "Spiritual Migration" is dazzling album.  There is something for every fan of metal music here.  The band has three main vocal styles, going between loud bellows to blackened shrieks to soulful, clean-sung melodies.
We are streaming the album below, courtesy of Persefone's bandcamp page.  Be sure to listen beyond the first track to get a full taste of what this album has to offer.  As always, thanks for listening and enjoy!
Posted by Unknown at 7:21 PM No comments:

Yes, we got new music to share today!  This post is going to just be a brief introduction to the music, after which we will let the tunes speak for themselves.  We love to find new and exiting artists around here, but sometimes familiar artists release new music that you just have to hear, so we like to share that with you as well.  Today you are in for a treat because we have the best of both worlds!

Sigur Ros-I have known about this Icelandic post-rock band for quite a while.  My first real experience with them was their latest album, "Valtari", released way back in 2012.  "Valtari was a good album with gobs of memorable piano melodies spaced across minimal, ambient tones.  In short, I found the music to be beautifully appealing.  If there is one thing Sigur Ros seem to excel at, it is surprise.  This band has another new full-length album to be released in June.  After hearing the new track they just uploaded, I'm really excited to get my hands upon the album.  With this song, Sigur Ros, take their music in a fresh direction, adding a harder, darker edge to it.  What results is a most satisfying ambient post rock tune with a dreary, buzzing low-end bass register that is all kinds of tasty.  Check out the new track here:


Public Transport-This is the new artist we are featuring today.  Just recently this instrumental artist released a fantastic track that spans between dream pop and melodic post rock.  The production value on this music is more basic and not drowned in synthetic noises, reverb, or overt distortion.  This is just simple, honest instrumental music.  They create a beautiful atmosphere with this track.  I can't say much more than was I already have said.  Check out the track here and be sure to visit Public Transport's bandcamp page for a name-your-price download of the new EP, plus more great tunes.  As always, thanks for listening and enjoy!

Posted by Unknown at 5:32 PM No comments: