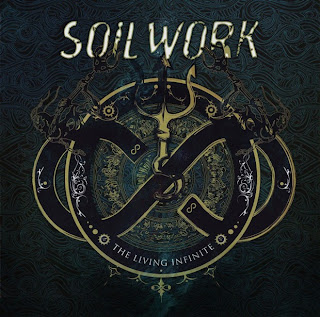 If you have been following us regularly, you might have noticed the couple of times in the last few months we have posted brand new songs from this Swedish metal band.

Soilwork has put together an impressive career spanning now nine full-length albums since 1995.  Over the years, the band's style has morphed and changed but this is still one of the most consistent Swedish metal bands of the era (meaning late 1980s-1990s Swedish melodeath).  Though the band has adapted styles a little bit by incorporating further and more varied use of clean-sung vocals, Soilwork is still very much an extreme metal band.

"The Living Infinite," released today, most certainly carries the mark of a Soilwork album.  The band's previous albums, "Sworn to a Great Divide" and "The Panic Broadcast" were seen as slight letdowns for hardcore Soilwork fans.  Instead of offering a 'return to form' Soilwork include bits of style spanning their entire discography.  Bjorn "Speed" Strid's vocals are much improved this time around, showing better range with both clean singing and extreme vocals.

As on "The Panic Broadcast," the metallic riffs are fast, thick, and smooth. Soilwork's drumming has never been tighter, and many of the tracks here scorch us with blistering leads and solos, which have been largely missing over the last few albums.

With "The Living Infinite," Soilwork doesn't break any new ground, but they don't have to.  By now their sound is well-established and their practice well-polished.  With that being said, there are no mind-blowing moments.  The album is content with what it does and does it well.

Not much more can be said of this album.  It is as good an album as Soilwork has ever released.  It doesn't break any new ground.  Instead, the consistency on display is notable.  If you are in the mood for some torrential extreme metal with memorable melodies (ah, alliteration attack), you need to check this album out.  One thing to note is that this is a double album.  The CD version contains two discs and 20 tracks.  Feast on a few of the released tracks below.  As always, thanks for reading and ejoy!